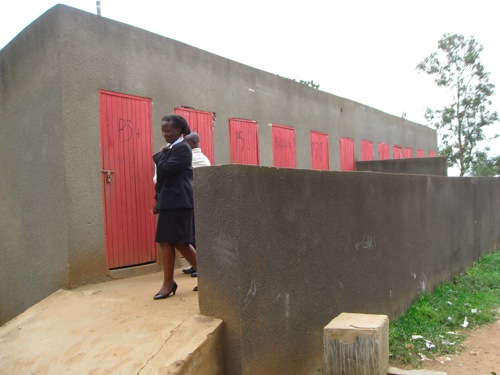 The urine is collected in the front funnel and the feces drop through the hole behind into a basket below the hole. The bin on the left contains ash. A scoop of ash must be deposited on top of any feces to dry out the feces, reduce smell and kill pathogens. Children bring ash from their homes to replenish the ash at school. 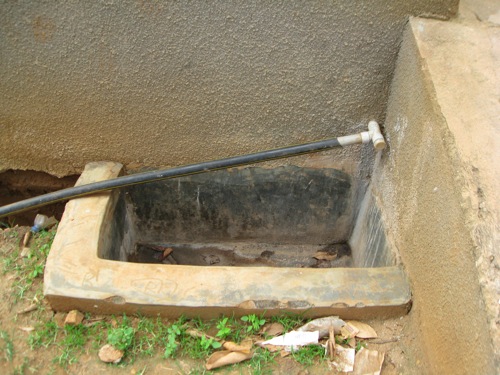 The urine is directed through a pipe to a jerrycan which would normally be placed below the pipe in the above photo. (With school out for the holidays, the jerrycan was not in position.)

The urine is left to sit for two weeks to one month before a farmer comes to pick up the aged urine for his fields. This aging reportedly kills any pathogens. The urine must be mixed in a 1:3 ratio with water before applying to fields and even then must not be applied directly to the roots of plants to avoid burning the crop.

The feces drop into the basket below the toilet and the feces are covered with ash. Someone has to remove the basket when it is full. The basket is dumped in a pile to decompose over 6 months after which the compost is suitable for application to fields. Other Urine Diverting models do not use a basket but allow the chamber below to fill with feces and ash. Once it is full, that stall is closed for 6 months to allow decomposition. The solids are removed after 6 months, at which point the solids look like dirt. That way, no one has to remove fresh feces.﻿ This would to be a better solution and would minimize human contact with unsanitary conditions.

Overall, I was very impressed with this technology. It provided sanitation and allowed the wastes to be reused as resources. There is no water required for flushing so this would be appropriate even in dry regions.

The school had left half of the traditional pit latrines standing. Even though the urine diverting latrines had no smell, were clean and new, half of the students used the smelly, dirty pit latrines instead. Why? Mixing feces with ash is considered witchcraft in Uganda. People believe that if you mix the two you will get inflamed hemorrhoids and other bad things will happen to the perpetrator and his or her family. I was surprised to find that even in the capital, this belief has not been erradicated. I did not realized belief in witchcraft was so prevalent and never thought that it would prevent the uptake of such a beneficial technology.

After visiting I went to see Netwas, a non-profit working in the water and sanitation sector of Uganda. The project manager told me the Urine Diverting project is the most difficult project she has worked on so far. I received a recent report on Urine Diverting uptake in Uganda. Uptake has been slow with the number of Urine Diverting﻿ toilets in Uganda in the hundreds. They are expensive to build (biogas systems could be build for less), there is significant cultural reluctance and public Urine Diverting﻿ toilets are in poor condition as are most aid projects that become a public good. The toilets were built, but either no one is in charge of maintaining the toilets or those in charge shirk their responsibilities.

On a positive note, the inside of the Urine Diverting﻿ toilets had some of the most kind graffiti I have seen. There was a lot of “I love…” and I didn’t understand the rest.

The BIG Picture Urine Diverting﻿ toilets seem like the perfect solution for Bwaise slum (see my previous post). Here is a sanitation technology that operates above ground (perfect for Bwaise because Bwaise is a wet land and it is impossible to dig a hole for a pit latrine or a biogas plant) and the users of the Urine Diverting﻿ toilet will not be tempted to empty the contents of their toilet into the alleys during rains as the Urine Diverting﻿ toilet produces solid waste and cannot be emptied as such. However, the belief in witchcraft may be difficult to overcome. I hope Netwas can help people to understand the benefits and allay the fears of the public.

Thinking about distribution in developing countries
View all posts by Kyle David →
This entry was posted in Uganda and tagged Kampala, sanitation, Uganda. Bookmark the permalink.